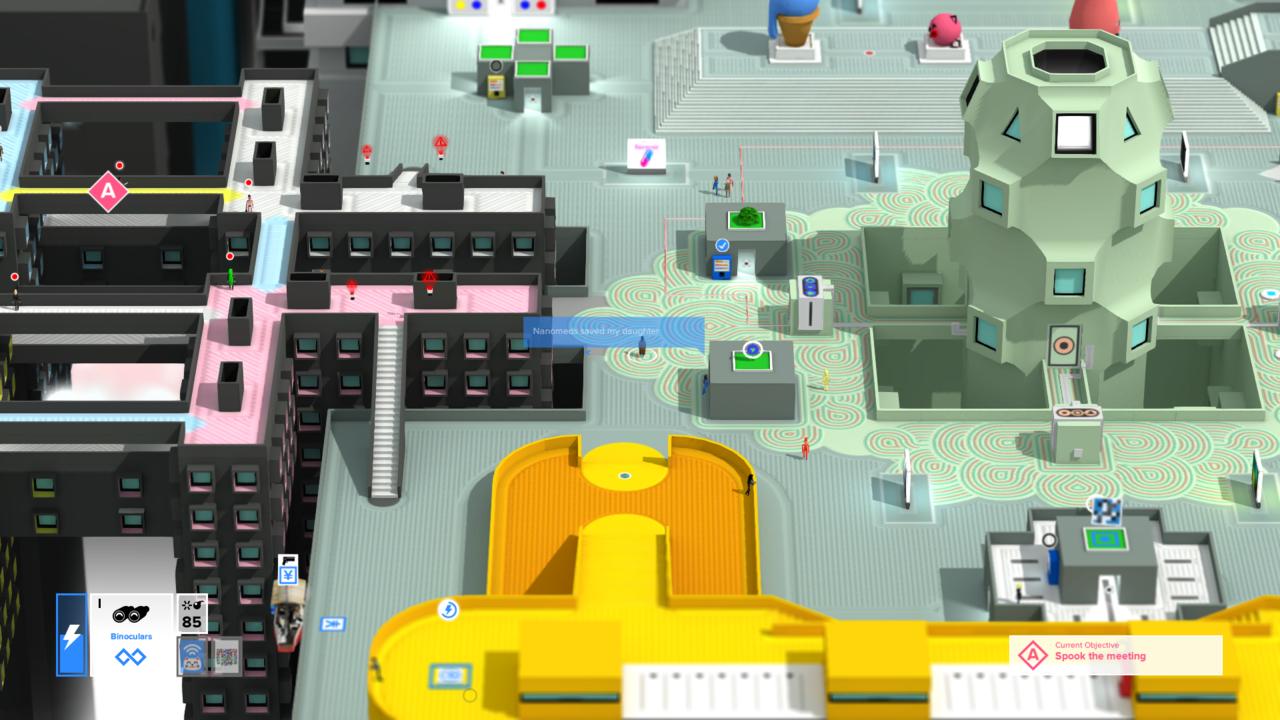 <![CDATA[ <p>There’s a moment early on in Tokyo 42 that makes it clear the kind of world in which it lives. A local gang wants my blood and are hot on my tail. As I’m being chased through the stark, minimalist city, I leap down a flight of stairs into a peaceful garden lined with trees and waterfalls. This is where the blood spills. My mission is to lead this gang, the Punks, into another’s turf. Specifically, the Skins–a nudist gang that carries assault rifles. After about 30 seconds, the Punks are slaughtered, the Skins go back to sunbaking, and I’m off to collect my fee for a job well done. It’s a hilarious, amazingly crafted series of events.

Played from a distant or close-up isometric perspective (your preference), Tokyo 42 is a cat-and-mouse murder-puzzle experience that takes place on a colossal piece of art. Meticulously constructed with boldly-colored beauty, the futuristic city is the main attraction and the true star of the game. Executing contracts takes planning, and shifting your viewpoint on a three-dimensional plane sometimes results in the most delightful moments of discovery and opens up different ways to complete missions.

Whether it’s the hidden staircases, gorgeously designed flying cars, and improbably huge cat statues, this vision of Tokyo is visually stunning. The hallmarks of cyberpunk are ever-present, with floating barges selling the latest weapons and slow, tense electronic music filling the streets. It is both meticulously designed and appears as clean as a freshly-wiped mirror.

The glory and excitement of desperate video game violence—the kind you can barely survive–is what Tokyo 42 swims in. One shot and you’re dead, and every confrontation could be your last. Whether it’s by sniper rifle, shotgun, grenade, or katana, you’ll come to a very fast end if you rush into combat.

That’s where the world design of Tokyo 42 comes in. In this sparkling future metropolis, different factions fight for control. You play a nameless citizen framed for murder, and your best friend Tycho decides the best way to prove your innocence is to become a hitman. That’s a strange road to take for someone on the run from the authorities–however, the bare-bones story is just a clothing line from which to hang blood-soaked missions. The plot and meager characters are there to serve the combat, which can swap from tense strategy to breakneck carnage in one swipe of a sword.

The skills required to execute your contracts are all there from the beginning. Unforgivingly, however, Tokyo 42 leaves the learning process and decision-making up to you. Certain missions are brutal in their difficulty, sending two dozen enemies–and many more bullets–across your path. After being cut down for the 15th or 20th time, you need to re-plan or relent. The game typically offers multiple directions to approach a target, but if an alarm is raised, there’s a good chance you’ll meet an abrupt, untimely death.

The missions of Tokyo 42 can be unnecessarily harsh–yet simultaneously intoxicating. Your contracts include rooftop sniping and stealth assaults to riding motorcycles and leaping atop flying cars to reach a target. While the difficulty can be high, each mission reveals another section of the city that’s extraordinary in its design. More than a few times, you’ll find yourself distracted from your task to take in the beauty of the neon lights, skyscraper-high artwork, and complex architecture.

That’s why it’s so unfortunate that Tokyo 42 fails to leave its own mark on the genre its developers so clearly admire. It literally wears its cyberpunk influences on its sleeve (your default coat, Deckard, is named after Blade Runner’s iconic protagonist), but it fails to cultivate a unique personality during its various missions. Carving up henchmen with a katana or raining down multiple grenades on an unsuspecting gang is exciting, but it begins to lose its appeal when you have to question why you’re doing it in the first place. The gorgeous look of every street, every building and every statue outshines character’s motivations–and, as such, you can’t ever decide if those reasons are righteous or selfish. You’re a faceless avatar, existing only for the next mission.

Surviving the corruption and violence of the big city is a bedrock on which cyberpunk builds its foundation. It’s a genre in which millions of stories can live, but only the truly extraordinary ones rise to the surface and escape the grime, the filth and, the gutter. Tokyo 42 stands as a monument to intricate, beautiful design, and its tense, unpredictable combat is a highlight. But somewhere along the way it forgets to walk in the dirt.

Similar Posts
Search between a mysterious hatch, a giant rock lady, and a precarious flatbed – Fortnite Challenge guide
...
Read More »
Release dates are the newest way to influence how, and where, you buy games
...
Read More »
Kingdom Hearts 3 Review – No Frowning, No Sad Faces
...
Read More »